We were delighted to contribute to a Q and A session with the British Institute of Interior Design. The article, from Dan Saunders, chair of the ANC, can be found at 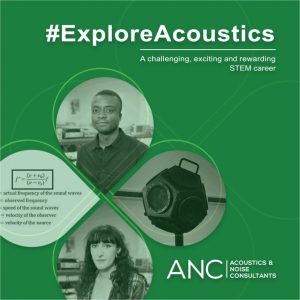 ANC, the Association of Noise Consultants, has launched a new online initiative designed to attract more students into acoustics.

The Association, the professional body representing consultants in acoustics, noise and vibration in the UK, has developed ‘#Explore Acoustics’ to signpost people to opportunities in the industry.

Featuring video interviews and in-depth case studies with students, graduates, professionals and academics in the industry, #Explore Acoustics has been introduced to address the current shortage of graduates joining the sector.

The campaign forms a cornerstone of ANC’s purpose to highlight the challenging, exciting and rewarding career opportunities available in acoustics, which utilise science, technology, engineering and mathematics (STEM).

All the information can be found at www.association-of-noise-consultants.co.uk/explore-acoustics 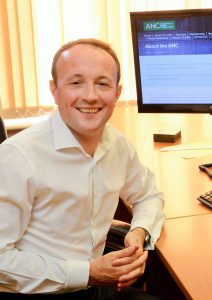 ANC chair, Dan Saunders, said: “There are few other careers that can offer the financial rewards, opportunities for travel, and such diverse work opportunities than acoustics. Yet few people have even heard of it.

“It’s a great industry to be in and we hope #Explore Acoustics gives an insight into all the many opportunities offered.”

Max Fordham is a multi-disciplinary engineering consultancy established in 1966 with offices in London, Cambridge, Manchester, Edinburgh and Bristol.  We have a team of 10 specialist acousticians based in London and Manchester.

The main focus of our work is architectural acoustics but we also undertake a proportion of surveys, pre-completion tests and auralisation work in our newly commissioned 3D Ambisonics lab, SoundSpace.  The majority of our projects are UK based, with a few in Europe and the Middle-East.

We are an employee-owned business and more than half of the people who work for the practice are partners in the LLP.  We have won a raft of employer awards including Building Magazine’s highest-rated engineering employer 2017, winner of the ‘Diversity and Inclusion Award’ at the ACE Awards, and inclusion in The Guardian’s UK300 Best Employers.

The “Fashion from Nature” exhibition, for which we provided acoustic design input, opened recently at the V&A Museum in Knightsbridge, London. In addition, Alison Brooks Architects’ new Cohen Quad, an expansion of Exeter College in Oxford, has just been completed comprising auditorium, seminar rooms, social learning, archives and accommodation space.

We have recently won new projects including Fairfield Halls, Pembroke College Cambridge and Norwich University of the Arts.

In the last 18 months we have welcomed three new members into the acoustics team – Neza Kravanja, Giorgio Agostini and Thomas Dimasi. 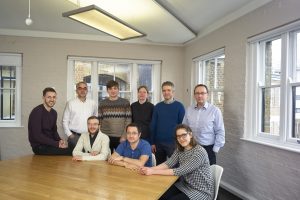 Alexandra Palace (Feilden Clegg Bradley Studios LLP)
The refurbishment at the Grade II listed Alexandra Palace in north London encompasses the Theatre, BBC Studios and the East Court.  The historic 1875 theatre will be brought back to life as a multi-purpose performance venue and the East Court will be refurbished to act as both a grand entrance foyer and flexible space for a variety of uses.

Grand Musée d’Art à Nantes (Stanton Williams)
This major art museum was renovated with an extension for the display of contemporary art as well as ancillary facilities.  We developed a bespoke light fitting for the galleries that included a micro-perforated acoustic material between the diffuser and the lamps to absorb sound.  In addition, we also used auralisation techniques to better inform critical decisions during the design process.

St. John’s Hill (Hawkins Brown)
This residential development in south west London is adjacent to the train line running into Clapham Junction – Europe’s busiest station in terms of rail traffic. We developed an innovative passive ventilation strategy to help deal with noise break-in during periods of summertime overheating.  More information, including auralisations and videos, can be found on our website blog. 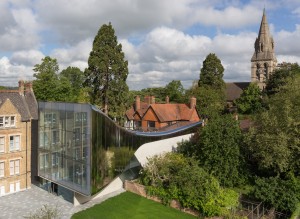 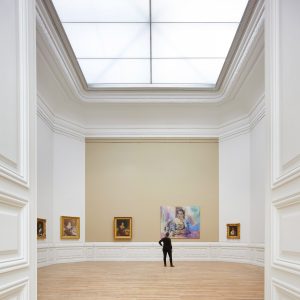 Acoustics specialist Clarke Saunders Associates is upholding a family and business tradition with the election of company director Dan Saunders to a key national association role.

Dan has been appointed chair of the ANC, the Association of Noise Consultants, which represents the acoustics and noise professions across the UK.

He follows in the footsteps of his father Alan Saunders and colleague Ed Clarke – both fellow directors of Clarke Saunders Associates – in taking up the position.

Featuring 110 members, ANC is the voice of professional consultancy in acoustics, noise and vibration.

“This is a time of political and financial uncertainty and it is important that the ANC offers a strong and compelling voice to set out the importance and value of acoustics in modern society.

“Particular areas I am keen to explore and develop include research, funded by ANC, which can benefit the membership.

“I am also keen to continue the excellent work of the previous chair Jack Harvie-Clark, and those in the role previously, in the preparation and issue of Good Practice documents.

“Finally, it is important to raise awareness of acoustics to encourage more people from across society into the industry.”

Dan started his career in acoustics in 2002, and since then has gained extensive knowledge across the UK and overseas in a wide range of disciplines including environmental, building, architectural, planning and industrial projects.

He has provided client and project management services on all elements of acoustics for a wide-range of large residential and commercial schemes, and is also an expert witness, with experience in assessing the noise impact of large scale industrial developments.

These include infrastructure, heavy industry, waste disposal facilities, power generation and renewable resources, such as offshore and onshore wind farms, throughout the UK and Europe.

Dan was elected chair at the recent ANC annual general meeting. Retiring chair Jack Harvie-Clark of Apex Acoustics and Andrew Parkin of Cundall have stood down after 6 years of service. New recruits include Martin Raisborough of MZA Consulting Engineers and Mark Scaife of MLM.

Robert Osborne, of ANC, said: “A significant strength of the association is the expertise our Board members bring and their commitment to the industry overall.

“The Association is grateful to Jack for his hard work and support as chair, and to Andy too for his contribution, which included chairing the ANC from 2014 to 2016.”