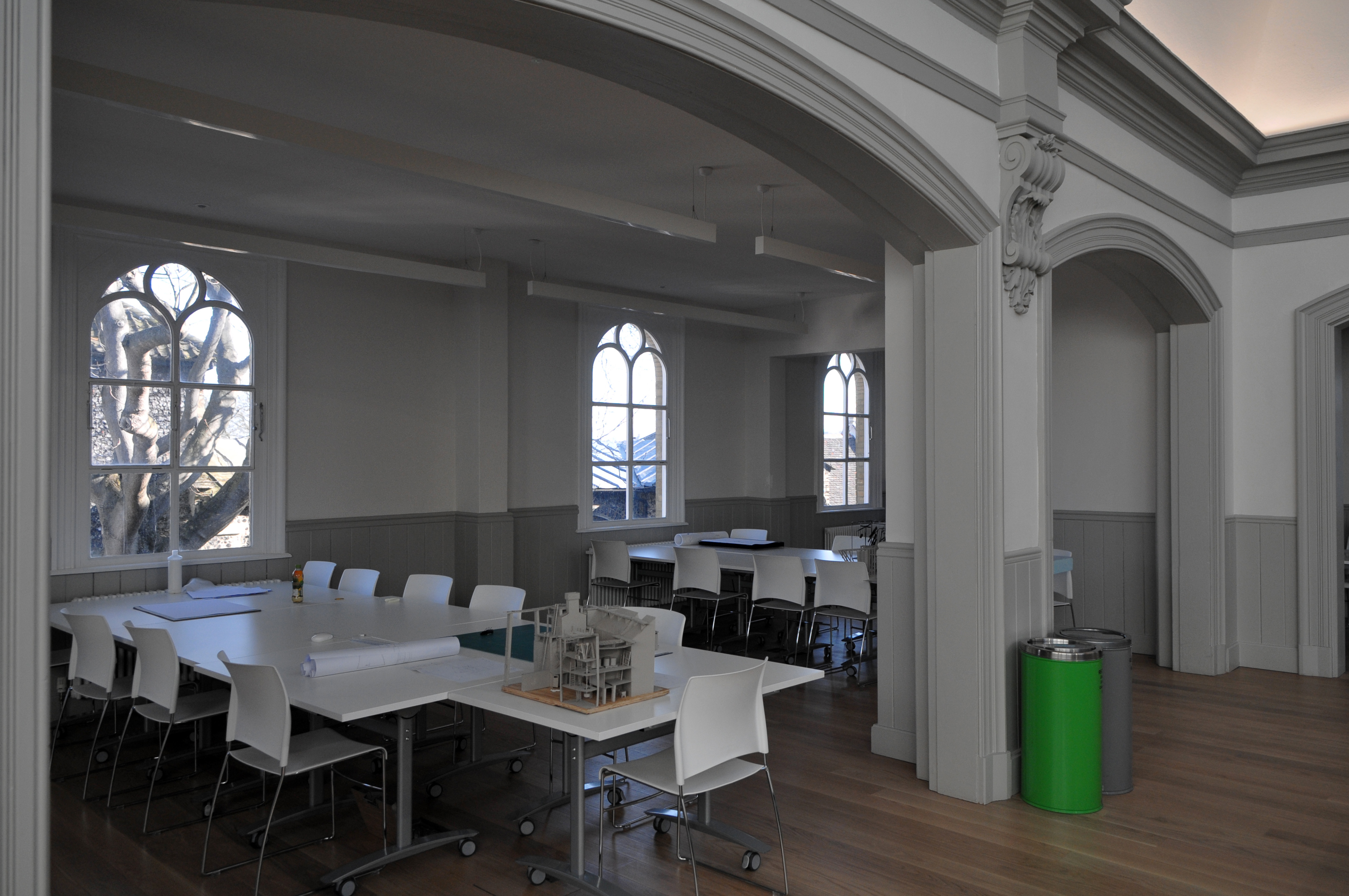 This project represents a successful and sensitive integration of acoustic and architectural design, which in is unusual in a historic building. Often in the conversion of listed buildings, the conservation constraints lead to severe compromises to, or in some cases complete abandonment of, the acoustic design. The building has already won a RIBA East Award and the Norfolk Constructing Excellence Heritage Award but more to the point, the staff and students are very happy with it.

Both the building and the brief were acoustically very challenging. Prior to the project, the basement housed a series of church meeting and function rooms, with the ground and first floors housing offices set around a large central two-storey meeting and worship space with a large glazed roof lantern, barrelled ceilings with stout cornices and a balcony with an ornate wrought iron balustrade. To provide good acoustics for study and teaching while remaining sensitive to the historic building fabric, required extensive use of innovative finishes such as spray plaster, monolithic rendered mineral tile ceilings and slatted timber finishes. The design also required meticulous detailing of sound-insulating wall and floor constructions, particularly separating floors. The result is a building which achieves good acoustic conditions in a largely ‘invisible’ manner.

The judges felt this was a really excellent achievement particularly given the modest budget available. An open plan space had been made to work successfully so that it that fulfilled its purpose and achieved a good acoustic performance. The challenges of doing this within a listed building made this even more impressive and it is an excellent example of architectural acoustics at its best.

The judges liked the way this combined consultancy experience with academic research. It set out a process for the future that had broad use and is a clever way of dealing with difficult structures. This work represents acoustic consultancy at its best. It deals with the problem of assessing potential locations for commercial gym facilities: a ‘low-profile’ problem but one that deals with complex vibro-acoustic behaviour, and which can have significant economic and social consequences for the people concerned.

This work demonstrates a significant advancement in analysis methods for the assessment and prediction of vibro-acoustic sources within existing structures, with the advantage that the technique can be extended to many other fields of application. The project summarises a new method for the prediction of structure borne sound and vibration generated by new sources within existing buildings in scenarios where source items cannot be directly tested in the receiving structure.

A technically challenging piece of work, it is an excellent example of collaboration between industry and academia, which has applied current research and experience from other industries. In recognising the problem complexity, and dealing with this in a comprehensive but practicable manner, the work has progressed beyond standardised guidance to develop a novel approach that has potential use beyond the immediate problem. The Judges’ considered this is a practical, validated solution that would be of wide benefit and appreciated that the method could also be applied to many other applications. As such the economic benefit is notable, and a simple replicable test could replace significant more usual testing.

This was an ambitious project where heritage and acoustics had to be combined. The St James Centre is the new home for Youth Service and Jersey Youth FM Radio and the design required the separation of amplified music spaces from a performance venue within a common listed building structure.

The element of the project considered for the award is the design and construction of two music rehearsal rooms, one recording studio and one radio broadcasting room onto the balcony of the 19th Century St James Church. The ground floor was to be refurbished as a 179-seat multi-purpose auditorium with the apse as a main stage. The Client had very high expectations for sound insulation performance between all rooms, yet in delivering the acoustic design to achieve such expectations the listed balcony’s timber panelling, arched ceilings and steel columns all had to remain untouched and exposed.

The way the consultant was prepared to work outside the usual design recommendations to achieve subjective and therefore potentially risky targets was noted by the judges. The use of auralisation to establish client expectations whilst not completely novel, has been implemented in an interesting way. A very high standard of sound insulation was required, especially at low frequencies and the consultants persuaded the client to accept a more realistic target by simulated listening demonstration.

The building also provided an opportunity in which public perception of good acoustics could be demonstrated and this was a major factor in the judges’ decision to select this as the winner.

Wallscourt Farm Academy is seen to be a fine example of how to create an inspirational educational environment through an understanding of the requirements and characteristics of an open plan space. These principles have been developed from attending and observing the behaviour and workings of various different open plan schools, as well as through data analysis from on-site measurements and CATT Acoustics models.

Years of research and project experience have enabled the consultants to develop a list of design criteria for the acoustics of open plan spaces. Working closely with the project architect, they were able to successfully apply these principles to produce a highly functional and usable space. The removal of walls meant that the consultants focused on STI as a key design parameter, and on communication as their tool to ensure that the open plan spaces are correctly designed. Their logic being that if the acoustic design is not bought into, it will not be implemented, resulting in a space that is not fit for purpose.

The judges had no hesitation in giving the award to this project as it was both innovative and different and most importantly identified solutions that could be used elsewhere. The judges were impressed that the consultant was keeping in touch with the school and so continuing to learn how the building functions over the next few years.

The developers sought to create an acoustic environment that had never been achieved elsewhere. The concept was for a café bar that contains a film screening area and simultaneously achieves acoustic conditions that enable film-watchers to enjoy the film without excessive intrusion of café bar noise; café bar patrons to enjoy a lively atmosphere enhanced by the film; and the ability to flexibly use both areas as one space.

This may be a small environment but it presents a significant acoustic challenge. This is a well explained project with in some ways a deceptively simple solution for a difficult problem. The project is more complex than merely placing a small screening area next to a bar, it has to be flexible enough to use the space in a variety of ways and as one open space and this project demonstrates that flexibility. This type of solution and approach could be adopted in other building design contexts where there is an adjacent conflict in acoustic requirements at the same time as a fluid space.

The judges were interested to see that the venue frequently screen silent films with the curtains open, as they find that the big screen helps draw in passing trade. This was one of the few entries that was not an office space which helped it stand out from a very competitive field. The judges considered it was a challenging location in which to achieve good acoustics. This was the first time they had seen TripAdvisor used to validate the acoustic performance of a building!